In DevOps, a CI/CD pipeline needs to be implemented. CI/CD is the abbreviation of Continuous Integration / Continuous Deployment (sometimes Continuous Delivery is used instead). CI/CD is seen as the backbone to enable DevOps. It bridges, maybe even closes, the gap between development and operations by automating the building, packaging, testing, provisioning of infrastructure and deployment of applications. In addition to CI/CD, there are of course other aspects (pillars) that bridge the gap between Dev and Ops. See "High-performance IT delivery models", for more explanation about DevOps. In this section an example CI/CD pipeline is explained, continuous everything is explained, the needed capabilities in a CI/CD pipeline are mentioned and examples of CI/CD tools are given.

Our example CI/CD pipeline consists of the CI part (the build pipeline) and the CD part (the release pipeline), which contain the following stages:

In every stage of the CI/CD pipeline, continuous monitoring (with tooling such as Dynatrace and New Relic) and the feedback from the monitoring are integrated. Any problem encountered in one of the stages will be – automatically – reported (with, for instance, ALM Octane or JIRA) and the CI/CD workflow will be stopped. DevOps teams have the practice to always have a successful CI/CD pipeline. DevOps team members will solve the problem and the process then reiterates if necessary.

Needed capabilities in a CI/CD pipeline

As mentioned at the start of this section, an automated CI/CD pipeline is seen as the backbone of DevOps. An automated pipeline enables:

Below we provide a list of relevant capabilities per continuous activity: 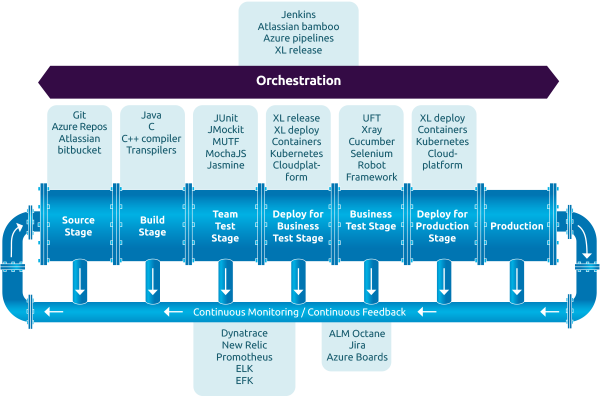