Maintainability is about modifying an IT system in easy and effective way. If more effort is spent on maintaining existing code than on writing new code this is a clue that maintainability may be poor. Modifications may include corrections, improvements or adaptation of the software. But it also relates to changes in environment, and in requirements, specifications and user stories. It also refers to the installation of updates and upgrades. Indicators for maintainability are the code quality, the documentation quality, the quality of tests and many others. 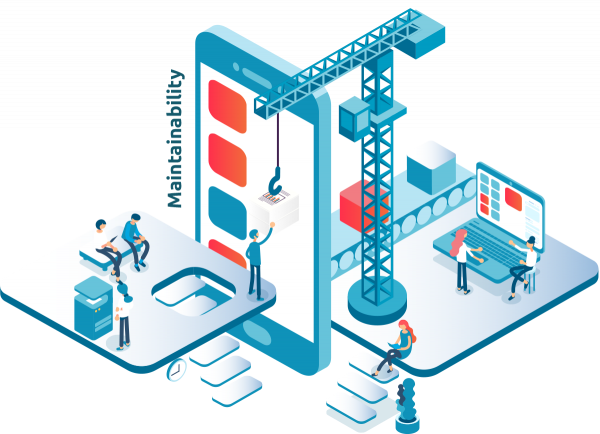 These five subcharacteristics cover quite different perspectives of maintainability, which also may be of interest to very different persons in (or even beyond) the team.

We will discuss testability separate from the other four subcharacteristics because these four are primarily a development focus, whereas testability has a testing perspective.

Measuring maintainability both statically and dynamically

The maintainability characteristics of an IT system will partially be measured by observing product (e.g. code-reviews), other characteristics can only be measured by observing people in operations while they perform maintenance activities. The first is pure static testing. The second can be called dynamic testing, but keep in mind that in this case the IT system itself is not the test object, instead the maintenance activities performed on the IT system are the test object.

Software artifacts that can be considered to be evaluated are for example source code files, data definition files, data manipulation files and active content of web pages. These could also be installation procedures or infrastructure-as-code.

Maintainability tests can be done by, or supported by, automated tools.

Examples of static measurements are:

The dynamic measuring of maintainability mainly consists of timing the duration of specific maintenance tasks.

Examples of dynamic measurements are:

Testability both concerns individual parts of a system, as well as the IT system as a whole and even the end-to-end business process.

The possibilities and capabilities of the test environment are also important for the testability of the system, think of possibilities for time travel to test extensive business processes such as expiry of insurance or mortgage terms.

A dynamic measure of testability is the "re-test efficiency", which is the ease of testing after a problem has been fixed.

To achieve good testability the team may need to add extra functionality that supports ease of testing. Think, for example, of adding facilities for time-travelling in a system that has a process with a very long duration (such as a system for life insurances). Also, the team may need special tools and facilities, for example to check the contents of a database by directly looking into the database tables.