In information technology, we come across processes at various levels. Business users will have an end-to-end business process that consists of various steps and decisions to influence the flow of the process. Systems developers will define the flow of a program in their code by writing statements, of which the decision statements will influence the flow of the program. For testing all these kinds of flows, an important coverage measure is path coverage. It can be applied in different test design techniques, especially process cycle test and algorithm test. 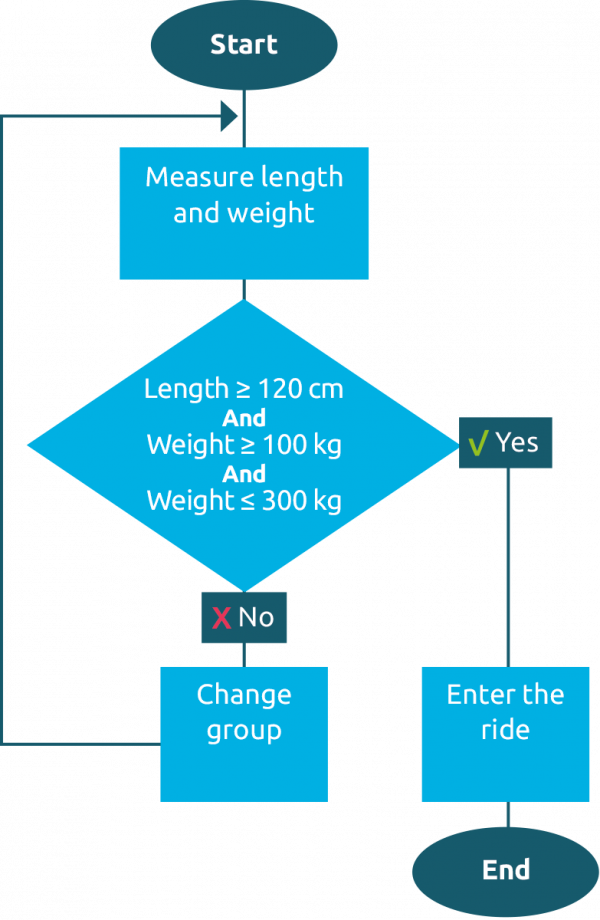 In this figure the core elements of a process or program flow are shown: these are the decision points, the start and end point(s) and the paths between them. The aim of path coverage is to cover the variations in the flow that are possible according to the chart. The test cases are described to indicate which paths in the flow should be followed consecutively, from start to end. The test cases together will achieve the desired coverage.

Keep in mind that such flowcharts with decision points and paths do not necessarily have to be about the functionality of the system. Security processes or work procedures in business processes can also be described with such charts, which makes the basic technique described here applicable for many different test varieties. And note that this type of coverage does not consider the conditions that are in the decisions, it only considers the possible resulting paths. When covering conditions is essential, apply a technique from the coverage group condition-oriented testing.

In the coverage of paths, various levels are possible. These levels are called "Test Depth Level" (abbreviated to TDL). The first level of coverage, test depth level-1 (TDL-1), provides the guarantee that each path has been travelled at least once. Therefore, for TDL-1 every path will occur in at least one test case, thus ensuring each path is tested. In our example this means there are three test situations: path 1, path 2 and path 3.

Higher levels are also possible; for test depth level 3 for each combination of two decision points, every combination of three consecutive paths is a test situation. In our example, there is only one decision point; so TDL-3 wouldn't make sense. In practice, most teams will find that TDL-2 will give them enough confidence: TDL-3 and higher are seldomly used. Basically, all following steps are the same for every test depth level. We will therefore only explain TDL-1 and TDL-2 in detail.

Every test case starts at the start of the flow and ends at the end of the flow. To be able to always go from start to end, some test situations may have to be used in multiple test cases.

In our example, an extra test case for TDL-2 should therefore be added that goes through the loop just once:
Test case 3: 1-2-3

It is a coincidence, in this simple example, that this is the same test case as for TDL-1.

Which is better: a few long, or many short test cases?

When applying path coverage on large flows with many decision points and (especially) many loops, a high number of test situations will have to be created.

Our first advice is to keep the above-mentioned rule of thumb in mind; create some shorter and some longer test cases so that each loop is tested zero, one and multiple times. If there still is freedom to choose either a few long or many short test cases, the test variety at hand will usually help decide.

When members of a DevOps team are testing code using a program flow, they probably want many short test cases, so that when a test case fails, it will be fairly easy to determine the cause of the failure.

When business people test an end-to-end business process (for example in an acceptance test), they would probably like to create a few long test cases. In their situation they usually don't expect many failures because multiple quality measures have been taken by other people previously (for example in reviewing, unit testing and other quality engineering activities) so they mainly want to assure that the business process indeed works by exercising all paths or all path combinations.